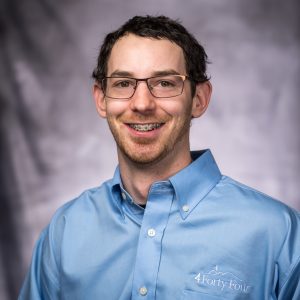 Playing with Legos fueled Jeff’s desire for building as he grew up in York, Pennsylvania. Exploring the great outdoors on his bicycle was also a passion. At the age of 18, Jeff was introduced and found that southern hospitality was calling him to Charlotte, NC. Moving South also brought Jeff good fortune as he met his future wife, Kelly, while waiting on a bus!

Jeff quickly traded in his bicycle for a motorcycle. Camping and riding through our beautiful mountains fueled their desire to move to the High Country. The newlyweds moved to Boone in the Spring of 2018 where they look forward to putting down roots in a new home.

Jeff truly loves working with whom he describes as “the honest and trustworthy people at 4 Forty Four." Jeff is quickly learning hands on construction and is developing his leadership skills daily. He is a great addition to the 4 Forty Four in house Crew. He said the thing he likes most while working with the 4 Forty Four team is the camaraderie. Jeff stated, “The good-natured spirit has uplifted those around me and some outside the circle of 4 Forty Four.”