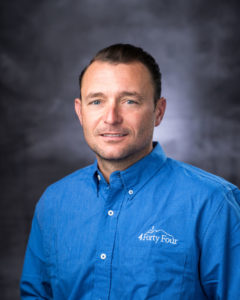 Ricky Lack was born and raised in Sparta, TN. He learned the craft of masonry as a teenager working in his family's business. After getting married in 2001 to his beautiful wife Cheryl, Ricky founded a property maintenance and landscaping company and operated it for several years. He sold the business in 2005 and returned to the construction industry as a licensed general contractor and business owner in the the state of Tennessee. Throughout his career, Ricky has always enjoyed volunteering in the non profit sector. In 2009 a Christian non-profit invited him to join their organization as a full-time team member. He followed his passion for helping people, earned a degree in biblical studies, and became a pastor. After serving 10 years in vocational Christian ministry, Ricky desired to return to the construction industry. He likes to work with his hands and his heart. He was looking for a company that builds great homes and serves its clients and community well. He found 4 Forty Four and joined the team in July of 2019.